How is it possible to check thermal stress in an electrical conductor?

Among the intrinsic characteristics of a cable or an electrical conductor, there are two values which are essential for its sizing:

For standardized cables, these values are imposed by the standard, for example, 90° C and 250° C respectively for cables insulated with EPR/XLPE.

It is, therefore, necessary to check that the passage of the short-circuit current (Ik) during the disconnection time (t) will not bring the core of the cable beyond its maximum temperature.

For a disconnection time of fewer than five seconds (hence the maximum imposed in the installation standards), the heating is considered adiabatic, that is to say, that it is accepted that the heat produced stays at the core of the conductor and does not have time to dissipate in the other elements of the cable.

In this hypothesis, the thermal stress borne by the conductors is calculated by the formula:

The thermal stress admissible by the conductor is calculated by the formula k2 × S2 in which:

It should, therefore, be verified that, in all cases of a short circuit, the relationship is verified:

To facilitate the calculations, it is possible to use the tables giving the values of k in the usual cases, as in the following example taken from document IEC 60364-4-43: 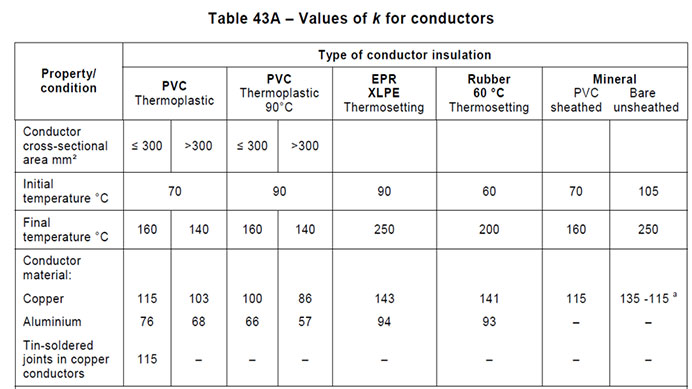 The elec calc™ software calculates the maximum let-through energy on all the conductors and compares it to their thermal withstand value (according to the formula k²×S²). This verification applies to the phases but also to the neutral and to the PE. If this condition is not met a thermal stress error is displayed on the cable.

Try all the advantages of our software

How to solve a thermal stress problem?

In the event of a thermal stress problem, it is always possible to oversize the cross-section of the conductors, thus increasing their admissible thermal stress. However, other possibilities can overcome this increase in section.

Use of limiting circuit-breakers: certain ranges of equipment are designed to prevent the establishment of fault current, by letting only a current of limited intensity. The limitation performance of a circuit-breaker is given by the manufacturer in the form of limitation curves:

Analysis of limitation curves with the elec calc™ multi-manufacturer catalog

The multi-manufacturer catalog from elec calc™ manages the limitation curves for the various protections. As soon as a reference with a limitation is associated with a protection device, the software is able to recover the limited let through energy associated with the prospective short circuit current. It should be noted that most miniature circuit breakers have limitation capacities, making it possible to solve the thermal stress problems in small section cables which are most affected by thermal stress problems.

My installation includes a lighting circuit with a U1000R2V-3G2.5 cable protected by a 16 A curve C circuit breaker.

Check Ik² × t > k² × S² => problem of thermal stress on the cable: in the event of a short circuit the cable will be damaged.

Integration of a circuit breaker reference with a limitation:

I now include a manufacturer reference on my protection. The software will, therefore, be able to read from the energy-limiting curve supplied by the manufacturer the let-through energy for a short circuit current of 5.63 kA:

In our case the residual energy is 15 120 A²s. It is lower than the conductor thermal withstand. So, we no longer have a thermal stress problem on the cable.

Go further with elec calc™ for the calculation of through energy

Taking into account the DC component: in the formulas mentioned above, we have considered that the value of Ik is the RMS value of the AC component of the prospective fault current. If we want to be more accurate, we must take into account the DC component of the fault current. The influence of this continuous component is especially noticeable when the point of fault is close to the sources. It depends on the disconnection time and the value of the X / R ratio of the circuit at the fault point. It is then advisable to calculate an equivalent thermal current which replaces in the formulas the current Ik.

elec calc™ takes into account the influence of this continuous component when the standard used requires it.

Multiple sources: a fault can be supplied by several sources, each contributing to the short circuit current. The protections associated with these different sources may not react at the same time to the short circuit current that they generate. The accurate calculation of the let-through energy must, therefore, integrate a chronological cumulation of the energies produced by each source.

This is what elec calc™ software does in order to get as close as possible to the real phenomenon.

What is solar self-consumption?
Scroll to top
X