Introduction: In order to do so, the user currently uses 2 symbols:

It means that the user needs to work twice more and consequently might do errors.

This “Tips & Tricks” details how to create a mixed symbol that can be connected and can show cross references at the same time. A temperature driver for transformers will be used as example.

Below you will learn how to create a single component aimed at regulating the temperatures of electrical transformers. 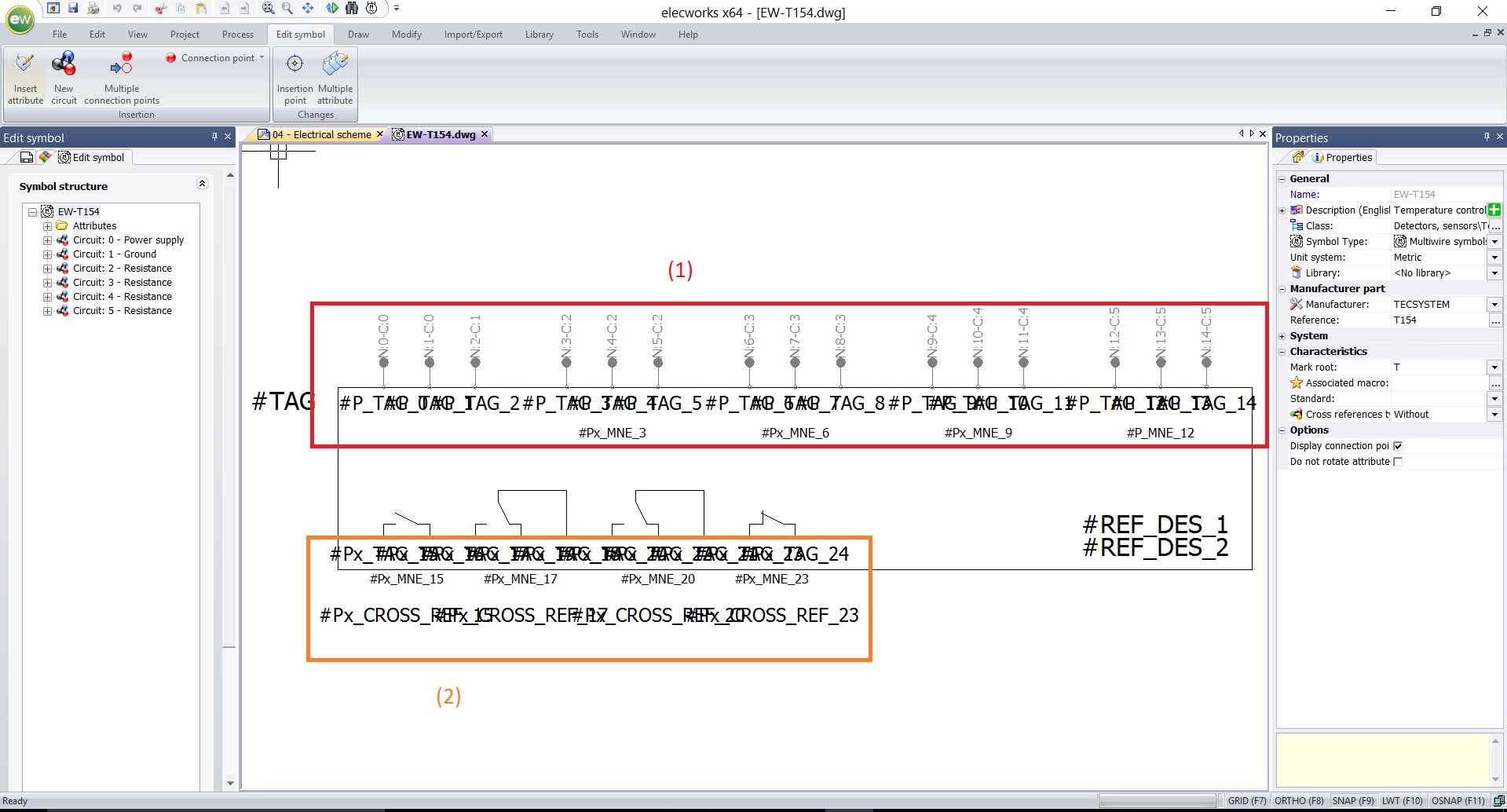 Once the symbol is inserted and an appropriate manufacturer reference is associated to it, the component will be as following:

When different contacts are inserted and associated to the component, the cross-reference information will appear automatically. 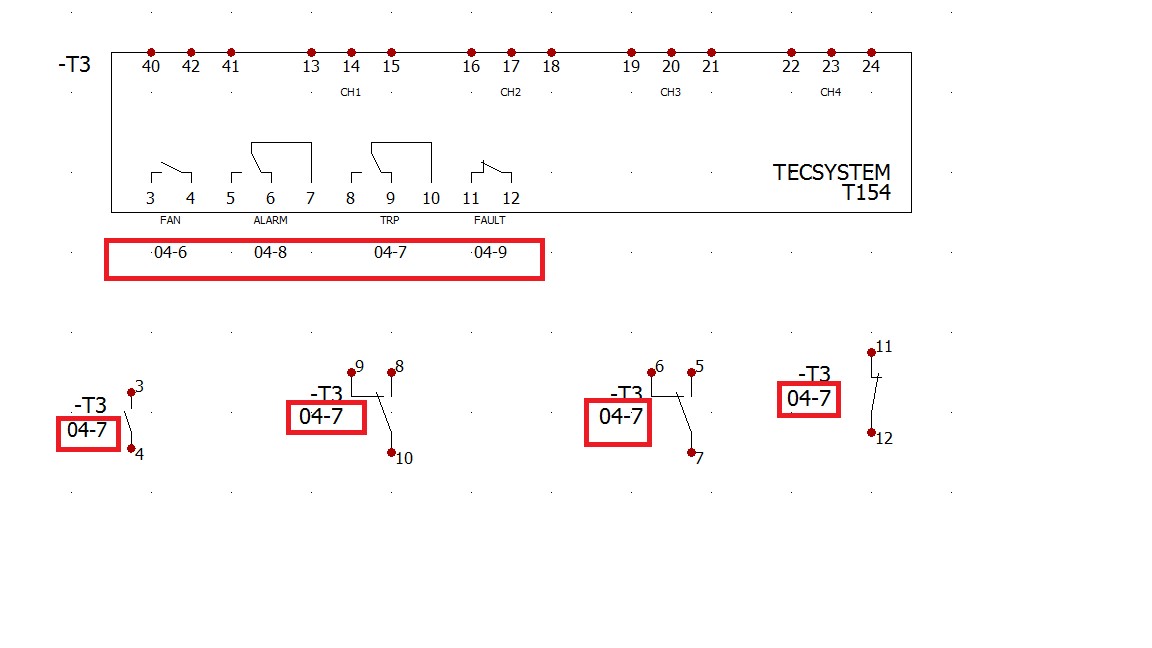 Thanks to only one block, two kinds of symbol are merged to connect wires and show cross references information, while minimizing the chances of error and maximizing your working time and productivity.

Note: These symbols and references are available on our Electrical Content Portal. 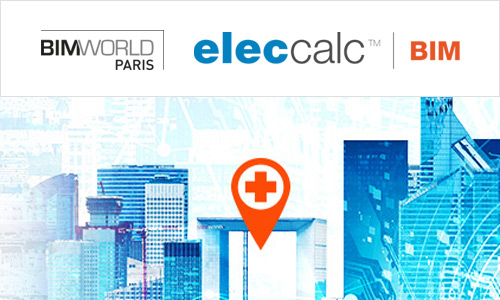 For two days, BIM World will bring together +150 exhibitors and all the major actors of the building and engineering sectors to discuss the future of construction practices. Thousands of visitors are expected.

“For engineers, constructors, designers and architects alike, BIM World will be ‘the place to be’ during these two days. As a matter of fact, our software solutions have been created in part for the professionals and experts working and evolving in the real estate and construction industry. Participating in this exhibition is crucial for Trace Software International,” Philippe Aupetit, Technical Director at Trace Software International, said.

Our team will welcome you at stand 58/59 during the entire fair trade.

We cannot wait to welcome you all during this great event that promises to be exciting and very instructive. 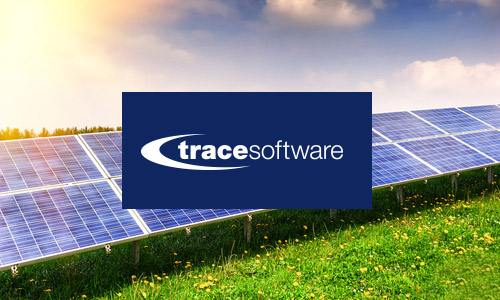 BARCELONA (March 1, 2017) – [ANALYSIS] Breaking all the records, 2016 became the hottest year in modern temperature monitoring according to NASA. Such alarming observation needs to be taken very seriously.

Our Environment at Risk

According to Gavin Schmidt, director of NASA’s Goddard Institute for Space Studies, “90% of the warning signal in 2016 was due to rising greenhouse gas emissions.” And for him, the upcoming year shouldn’t be any different. 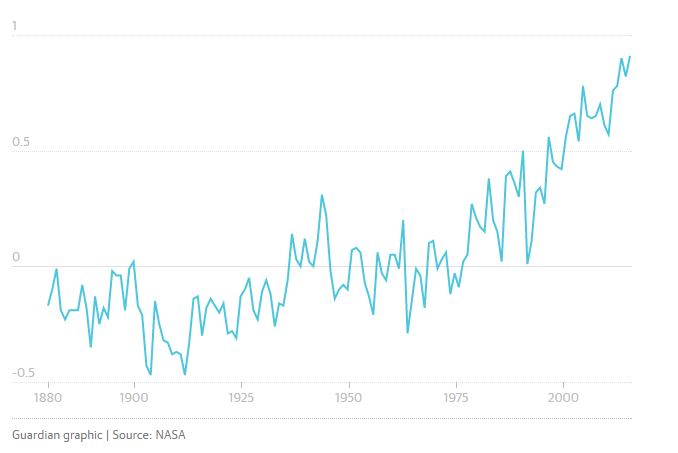 Changing our habits and the way we consume is crucial in order to save our planet. Sustainability is key to the preservation of our fragile ecosystem during the next decades. According to the Bruntland Report for the World Commission on Environment and Development (1992), sustainability is defined as the “development that meets the needs of the present without compromising the ability of future generations to meet their own needs.”

Maintaining our consumption level of fossil energies is not an option anymore. In order to maintain our standards of living while protecting the environment, alternative forms of energy – more responsible and eco-friendly – are needed. Green energies have been developed in order to meet these needs.

A New Era for the World

According to a new report by Bloomberg New Energy Finance, solar power – energy from the sun converted into thermal or electrical energy – is now one of the cheapest form of new electricity on the market. Multiple countries are investing more and more in this form of energy.

Until 2013, France, Germany, Italy and the United Kingdom leaded the way as the biggest producers and consumers of solar power. However since then China has overtaken these countries, becoming the country with the highest number of installations at 44GW in the world. The United States and Japan are also expanding their investments and will probably distance Germany in the near future. Latin America is also getting more and more involved in the global development of the solar energy market. Brazil, Chile and Mexico are set to install accumulative 26GW by 2021.

Soon, developing countries will supposedly become the biggest producers and consumers of solar energy, leaving Europe and the U.S. behind. Evaluated $108.3 billion in 2014, the global photovoltaic solar market is expected to reach around $148.5 billion by 2020 according to Zion Research in its report “Solar Photovoltaic Market for Residential, Non Residential and Utility Applications: Global Industry Perspective, Comprehensive Analysis and Forecast, 2014-2020.” 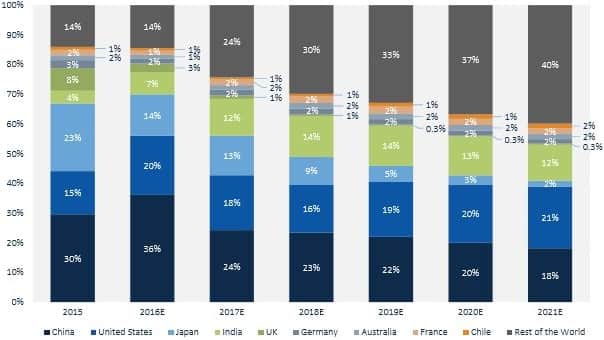 Cheap and ecofriendly, solar power is now the best solution to help us reduce our foot carbon print and limit global warming.

archelios™ Suite is a unique software solution that helps engineers, installers, consultants and investors work on the entirety of a photovoltaic project; from the feasibility study to the complete generation of the calculation notes and documentation that are needed for the implementation of such type of projects.

archelios™ Suite is made of two major applications:

archelios™ Pro is an online application aimed at creating the complete design and feasibility study of any type of photovoltaic installations based on a 3D simulation and thanks to an updated worldwide database (from solar panels and inverters to meteorological stations), horizon masks, custom or manual string wiring and the most precise yield calculation (according to Photon Labs and the IJEEE). It allows the user to export his projects as a complete PDF report to MS Excel, AutoCAD and to archelios™ Calc.

archelios™ Calc is a complete calculation tool created to size photovoltaic installations that are connected to the grid according to the norms NF C15-712-1 Edition 2010-07 and 2013-07; IEC 2015-04 Edition. It is a professional tool specifically developed for photovoltaic installers, providing detailed one-line diagrams of the whole installation; DC and AC Electrical sizing; single and multiple inverters; visual signalisation; graphical indicators of compliance…

From May 30th until June 2nd, Intersolar Europe will take place in Munich (Germany). World’s leading exhibition for the solar industry, Intersolar will bring together 150 speakers, 1,200 exhibitors and over 40,000 visitors. Strongly involved in the preservation of the environment, the Solar Division of Trace Software International will take part to this major event and will launch archelios™ O&M, its new software for operation and maintenance of new and existing photovoltaic installations.

Solar power and photovoltaic systems are our future. It’s time for action: together let’s make the planet a better place for the next generations.